Coal and climate change forum: Weds 12 August 7pm. Organised by NQCC this free public forum will be held at the Townsville Yacht Club in Plume Street (off Palmer Street). More info here and to help with seating please RVSP. 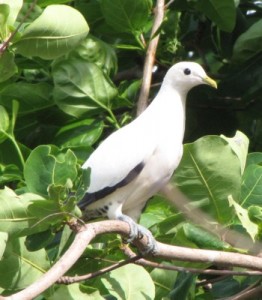 PIP documentary launch Saturday 5 September: The eagerly-awaited documentary on the history of the Brook Island pigeon counts, now in their 50th year, will be launched in Cardwell on Saturday evening, 5 September. There will also be a presentation in Townsville at the BirdLife Australia meeting on Saturday 12 September. The DVD will be available for sale, along with a booklet containing Margaret Thorsborne’s personal account and memories of this remarkable story. WQ Townsville is proud to have been one of the sponsors of this documentary. Email us for more details.

September field trip Sunday 20th: All being well, and depending on a pre-trip check, our plan to walk part of the Dalrymple Track will go ahead in September so keep the day free if this interests you. We will be starting from the western end of the track which will mean either going up on Saturday or an early start on Sunday as the track’s starting point (35km west of Ingham) is about a 2hr drive from Townsville. 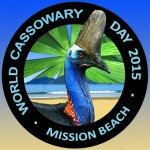 World Cassowary Day 26th September: All things cassowary will be on display at Mission Beach for World Cassowary Day! If you are travelling north around this time (it will be school holidays) it should be a great day.  A lot’s been happening with cassowaries in the last few months, most of it not good, so this will be a great opportunity to celebrate and promote these icons of the tropics. See also the paragraph below (Cassowaries in Crisis) and follow the link to our longer post.

Reef Blitz in Townsville October 16th-17th: I have no further news on this as yet, but you can pre-register on their website. [Link expired] We will try to get information out as soon as available.

July’s Cape Ferguson field trip attracted a large turn out in beautiful weather. What a spectacular area this is and how fortunate we were to be able to arrange access. Please read the full report, and enjoy the photographs here.

Cassowaries in crisis: You may have heard on the news about the proposed closure of the Cassowary rehabilitation centre at Garners Beach (adjacent to Mission Beach). This is just one of several very worrying issues regarding cassowary survival and conservation. Our post Cassowaries: who cares? gives more information and suggests ways to help. Read more here.

Carmichael mine decisions: 2 battles won, but the fight goes on.  News that the Federal Court had rejected the approval given by Environment Minister, Greg Hunt, for the Adani Carmichael mine in the Galilee Basin, was quickly followed by the Commonwealth Bank’s announcement that they will not be investing in this mine. While the court ruling is a good deal more than the mere “technical glitch” that the mine’s advocates claim, CommBank’s decision does not mean money will not be forthcoming from other banks or indeed from government funds. Take a minute to ponder that it is 48 years since the historic Ellison Reef campaign saw the beginning of the fight to stop oil drilling and limestone mining throughout the GBR and yet here we are still, now battling to protect the reef from coal. Then go to these these websites and see how you can help: Mackay Conservation Group and Australian Marine Conservation Society.

Losing the best of the best: The conservation movement was devastated by the sudden death of reef campaigner Felicity Wishart in July. Tributes poured in from around the country and overseas for this gifted, dedicated and immensely skilled woman who had worked for the conservation movement all her adult life, most recently as the outstanding director of the Fight for the Reef campaign. The AMCS tribute is posted here.

Last week we also lost one of the pioneers of the conservation movement in North Queensland. Billie Gill, daughter of one farmer and wife of another, became secretary and then president of the Innisfail branch of our Society in the 1960s and 1970s. As well as being an expert ornithologist, who contributed much to our knowledge of birds in FNQ, she was a self-effacing but important figure in the very early campaigns for both reef and rainforest which began half a century ago. 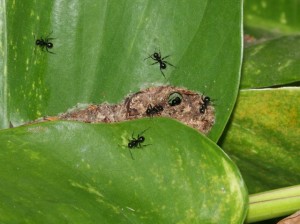 Do you have any black arboreal weaver ants nesting in your garden trees or shrubs? If so, Mike Downes would like to hear from you. He’s been studying them for six years and needs to get samples from a wide range of suburbs. These shiny, jet black ants are about the same size as green ants only more solidly built, and construct their nests in the same way, by sticking leaves together using silk from their larvae. The nests are smaller and less conspicuous, and the ants themselves are less aggressive than green ants, delivering only a feeble bite. They adopt many host plants including Calliandra, Ixora, native mulberry etc; but palms are probably the favourite. If you have these weaver ants on your property, please email Mike or phone 0428194700.

A JCU project team is investigating community attitudes towards coastal development and would like your views. They have developed a questionnaire which can be completed in about 15 minutes (it took me less than that), your responses are anonymous and you can opt out at any time. This seems a worthwhile project so follow this link [Links expired] to read more and, if you wish, complete the survey.

PETITIONS of interest: Readers may like to support two petitions that arrived in my inbox recently. The first is an appeal to Federal Environment Minister Greg Hunt, regarding a very large development that will threaten the habitat of koalas, spot-tailed quolls and other wildlife in North Maclean (south of Brisbane). You can read more about it and sign here. The second comes from Wildcare Australia (a Queensland wildlife carer organisation) regarding a proposed kangaroo cull at Sanctuary Cove – this is the link.[Links expired]

The red-necked crake is back! Or perhaps it never went away. First reported to us in January by Council staffer Greg Bruce, the Queen’s Gardens sighting was confirmed by members of Birdlife Townsville. Greg recently told me he has seen it again, in much the same place and although quite shy it does not seem to be unduly alarmed by observers. Best time to see it may be very early morning and it prefers the area near the big rain tree (often used for weddings) or around the Kennedy Lane entrance.