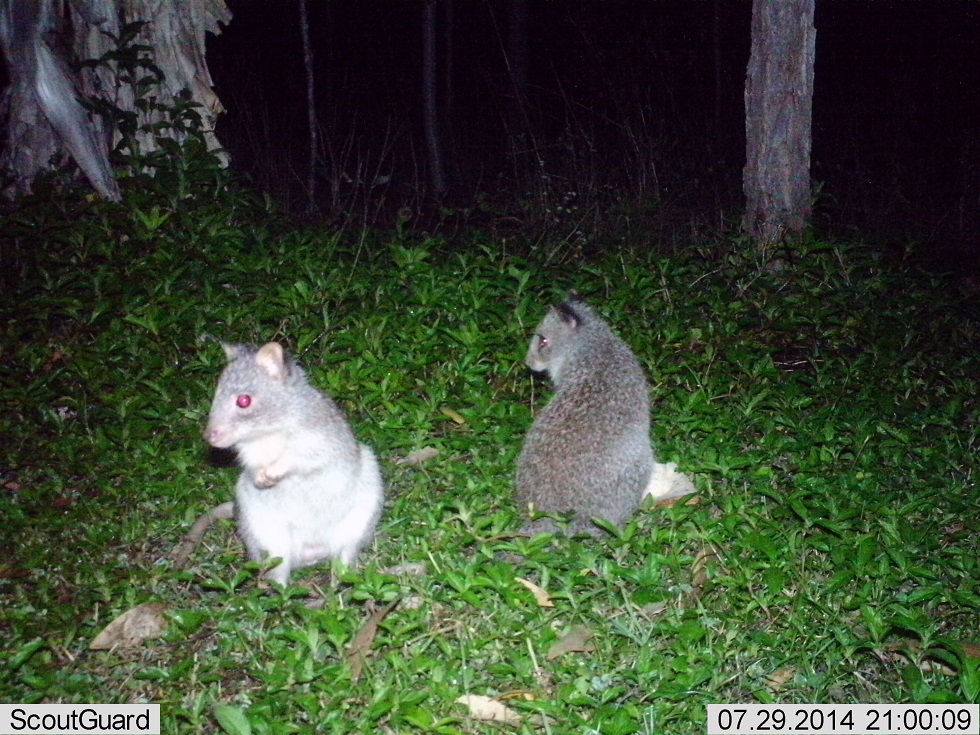 A few weeks ago our secretary Beth received an enquiry from a Black River resident who had observed some small mammals, at least three, on his property. His hope that they might be musky rat kangaroos sounded exciting but sadly unlikely. Musky rat kangaroos (Hypsiprymnodon moschatus) are a rainforest species occurring in the forests of the Wet Tropics north of Ingham. Moreover they are diurnal, whereas it was apparent that the animals at Black River were active after dark. We thought it more likely that they were rufous bettongs (Aepyprymnus rufescens) which, to add to the confusion, were formerly also known as rufous rat kangaroos, though now classified in a different family.

Three of us arranged to visit the property and talk to the owner in person. He showed us whereabouts on the property he was seeing the animals and a photo he had managed to get on his iPhone. This more or less confirmed our bettong identification but to be absolutely sure Beth and Denise went back armed with four cameras and the following week Denise returned to retrieve the cameras and view the footage. (Note: You will need to click on the photos, especially the smaller ones, to see the images more clearly) 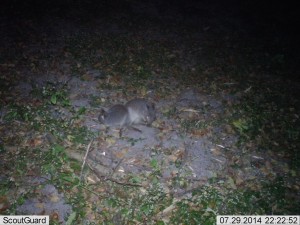 Shown here are some of the resulting images of what are clearly an adult and juvenile rufous bettong. After viewing images from all the cameras, placed in various locations, Denise was able to conclude that the adult female had a new baby in her pouch, which is normal once the previous youngster has vacated it.  She also discerned the presence of another adult, dimly captured in one of the shots. In the top photo the juvenile appears closer in size to its mother, than in the other shots – does this mean there is more than one family pair on the property? Other foragers caught on camera were agile wallabies, northern brown bandicoots and a brush-tailed possum – all a lot more common than the bettongs.

The property owner was very co-operative and anxious to know the true identity of his small tenants, and to learn more about them. More importantly he clearly felt a sense of privilege at having these generally shy marsupials on his land and is keen to ensure they remain safe there. Fortunately he has no dog so that is one less threat and the property is well-treed with plenty of long grass. It is also some distance from the highway on what seems to be a quiet road. His neighbour across the road has also reported seeing the animals, possibly different individuals, on his own land. 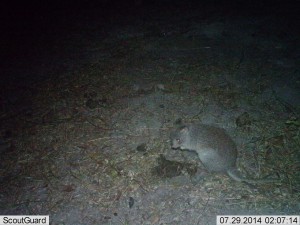 Interestingly the bettongs were seen around a chinee apple tree and there was evidence of some fallen fruit having been nibbled, possibly, though not necessarily, by a bettong. While chinee apple is usually something we’d like to see eradicated this does raise the question of whether it provides essential sustenance for native mammals in areas from which much of the original vegetation has disappeared. And could chinee apple thickets provide animals like bettongs with an effective defence against marauding cats and dogs? Food for thought (as well as bettongs) perhaps!

So, never be surprised at what might turn up in your backyard, particularly if you live on the fringes of the city, or close to areas of bushland. Bettongs are not rare but urban and agricultural expansion along the coast makes life pretty hard for them as habitat is destroyed or degraded, and threats from dogs, cats and traffic increase. Even if dogs are confined at night, they can still flush out bettongs, bandicoots and other mammals from their resting-places during the day, so have a well-fenced area where your dog can run rather than let it have free rein over the whole property. Keep as much native vegetation as you can and some long grass to provide cover, food and nesting material. Whatever the size or location of your ‘back-yard’ if you do have interesting visitors, please let us know.

The Black River photographs, along with the property’s co-ordinates, have been forwarded to QPWS so that the record can be included on the Wildnet database. We also gratefully acknowledge the support of Aquila Environmental in the loan of cameras.

Rufous bettongs (Aepyprymnus rufescens) belong to the family Potoroidae, containing potoroos and bettongs. They occur in eucalypt and wet sclerophyll woodlands and forests along the coast of Queensland and north-eastern NSW and in more open woodlands west of the dividing range. They seem to prefer a sparse understory of native grasses, particularly blady grass (Imperata cylindrica), and carry grass and leaves in their prehensile tails with which to make nests in the shelter of hollow logs or grass tussocks. Rufous bettongs are nocturnal and eat mainly roots and tubers, as well as flowers, grass and grass-seed and some invertebrates. Head and body length is approx. 38 cm, with a long tail. Their fur is described as silvery-grey with a reddish tinge and they move with a hopping motion, similar to their much larger wallaby and kangaroo relatives. 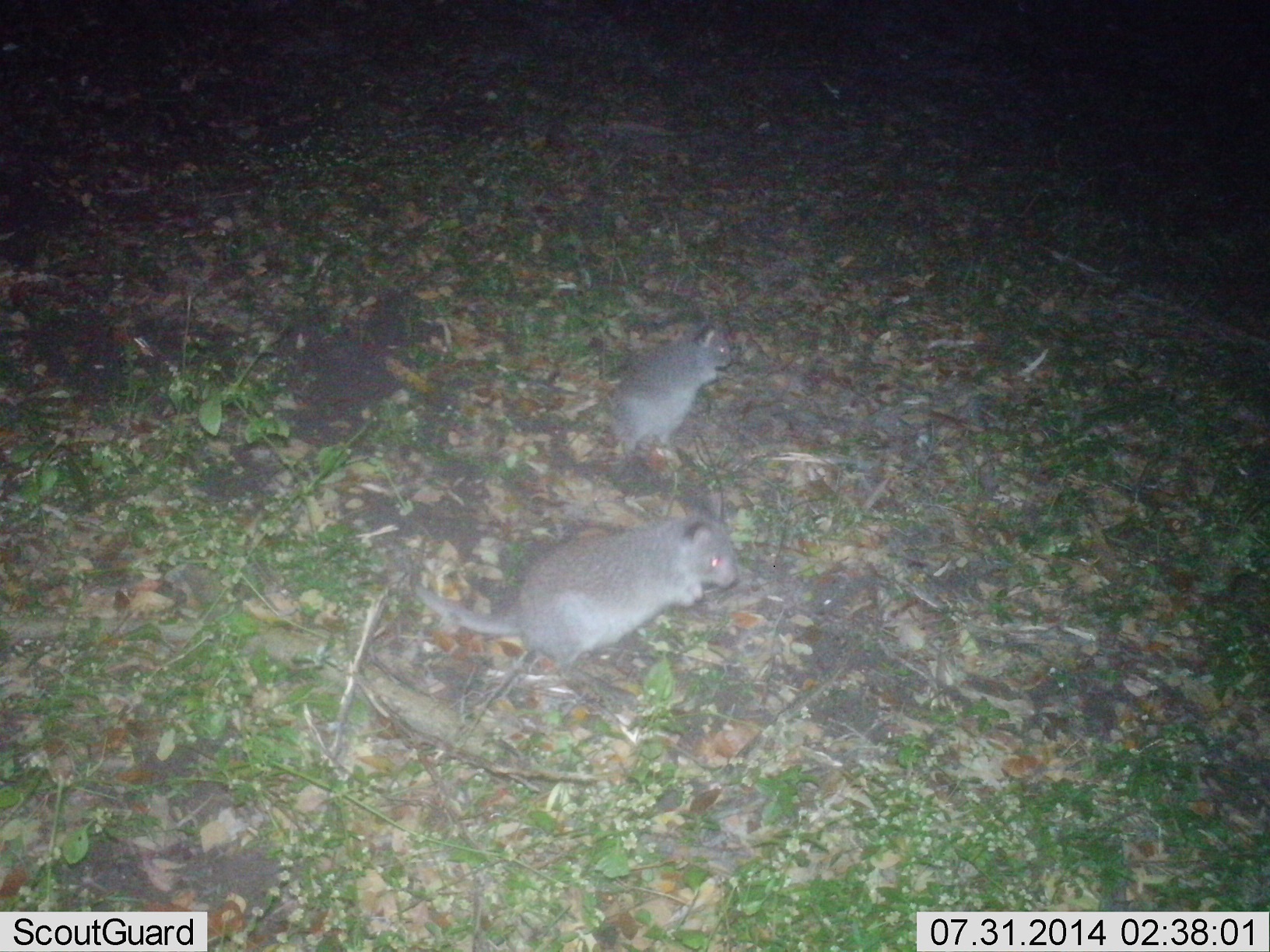 Mother and young – possibly a different pair to those in the top photo. Photo WQ Townsville. 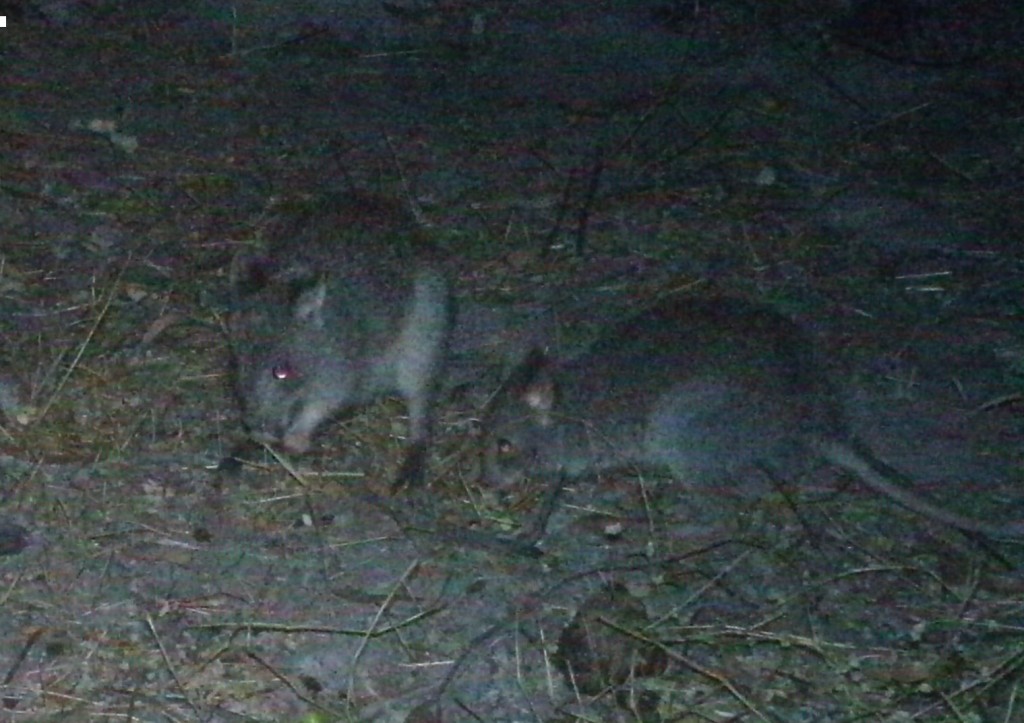