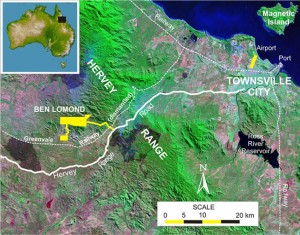 The following article is compiled, with permission, from a brochure issued by the community group Citizens Against Mining Ben Lomond (CAMBL). CAMBL is focused on preventing the reopening of the Ben Lomond mine because of the safety and environmental threats that it presents in the region. The following text does not necessarily reflect the views or position of the Townsville Branch of Wildlife Queensland.

Exploratory uranium ore mining was undertaken at the Ben Lomond site between 1976-1982. Three years later, the mine was closed following the then federal government’s “Three Mines Policy”. Recent changes in policy at both a Federal and State level means that uranium mining at Ben Lomond could now be resumed.

Traces of uranium occur almost everywhere but where there are significant concentrations of the ore it may be mined. Uranium is radioactive, meaning that it has unstable atoms that explode microscopically in a spontaneous process called ‘radioactive decay’. When a radioactive atom explodes, it is changed permanently into a new substance. Uranium decays in a cascade of additional radioactive substances until finally it becomes stable as lead.

In radioactive decay, the exploding atoms give off a burst of energy and release highly charged alpha and beta particles. These particles damage a living cell by breaking its chemical bonds and disrupting the cell’s genetic instructions. Very small doses of radiation can cause cancers in the person exposed to it and congenital abnormalities and possible genetic defects in future generations.

Uranium tailings are what is left over after the ore has been processed and contain over a dozen radioactive elements which are extremely harmful to living things.One of these, Thorium-230 will last for hundreds of thousands of years. Uranium tailings constantly produce large amounts of radon gas and those from ores like that found at Ben Lomond, will contain about 57% of the radioactivity originally in the ore.

In North Queensland heavy rainfall, especially from cyclonic storms, increases the problems of safely operating a uranium mine, and the storing and management of radioactive ore and tailings to the point of non-viability. In any location the risks associated with storage of uranium tailings are:

After very heavy rain in 1981, when exploratory operations were under way at Ben Lomond, rainwater came into contact with stored uranium ore. The radioactive runoff caused significant contamination of Keelbottom Creek. Many years later, in 2005, Federal MP Bob Katter told parliament that the spill caused radiation levels 10,000 times higher than the safe level.

In 1981 the mining warden for the Charters Towers mining court recommended that an application by the then mine operators for a second mining lease be rejected. His recommendation was made with respect to the waste tailings of the mine because he was “of the opinion that the public interest or right may be prejudicially affected” by the granting of the lease.” The Mining Warden expressed his doubts regarding  the “possibility of effective long term isolation of any toxic materials contained in the residue sludge … taking into consideration the erosive nature of the country, the extremely high rainfall … particularly in the cyclonic season, and the absence of any ongoing maintenance during the hundreds of years after mining ceases.”

An additional risk in our area arises from the poor suitability of the road network for the transport of processed radioactive yellowcake.

If you would like to have more information or support CAMBL’s campaign please visit their Facebook page. You can also read posts about the issue via the North Queensland Conservation Council website (NQCC) .